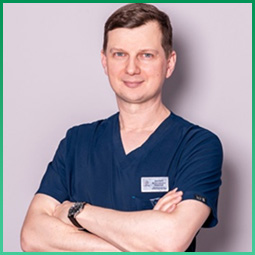 Title: Impact of “Double-skin” technique on the efficiency of laser treatment In pediatric patients with port wine stains: a cohort study

Laser treatment (LT) is the first-line treatment for port wine stains (PWS), which are common vascular malformations occurring in 0.3%-0.7% of newborns. However even when LT is based on the selective photothermolysis it causes the firstdegree burns. While being typically benign by affecting only the epidermis, or outer layer of skin, the burn site is remaining red, dry, and very painful. As Haemoblock contains nanoparticles of silver and is known for both bactericidal and bacteriostatic effects, it likely decreases the potential for infection postoperatively. Furthermore, after fibrin replaces the superficial structure «Haemoblock-albumin», the polyacrylate matrix is plasmolyzed which initiates the cascade of signals required for the tissue regeneration processes. Objective of the study was to examine the effect of the local haemostatic agent Haemoblock in lowering postoperative complications in children with PWS undergoing a laser surgery if delivered with transdermal patches. Methods: This is a longitudinal cohort study of children (?18 years old) with clinically diagnosed PWS admitted to the Vascular Anomalies Centre between June 1, 2019 and June 1, 2021 in Moscow, Russia. The overall number of patients was 105. Group with Haemoblock (A) and the Group without Haemoblock (B) included 50 patients each. We evaluated skin phototype according to Fitzpatrick classification and obtained a temperature value of the outermost surface of the stain in both groups. Missing data was collected using validated instruments. We performed a comparative analysis. We compared outcomes between groups using generalised estimating equations.
Results: Significant differences in clinical signs, symptoms, laboratory test results and risk factors for infectious complications were obtained during the postoperative enhanced recovery. Patients in group B were also associated with mood and behavioural changes.
Conclusion: The “Double-skin” technique might be associated with reducing/preventing negative outcomes of postoperative infection, the prolonged functional recovery, and the likelihood of mental health issues.

Dmitry Romanov is a paediatric surgeon, aninterventional radiologist, and a high-qualified laser surgeon. After obtaining his diploma at Russian State Medical University in 1996, he had gained a specialization in ultrasound diagnostics and laser children's surgery; then by the end of 2014 he successfully completed an internship in the United States at the Laser & Skin Surgery Center of New York. By that time, due to his academic and professional experience he was promoted to hold a leadership position in the Department of vascular surgery in the one of the most featured Russian hospitals. In parallel he became an attendee of ISSVA annual meeting and has been participating in both Debates & Updates from 2012 till 2021. Now Dr. Dmitry Romanov is CEO of HEMA group, and a Medical Director of the Vascular Anomalies Centre (Moscow); so, he continues developing the effort of laser surgery in Russia and on the behalf of his colleagues incarnate a fundamental dimension of Vascular Anomalies treatment.