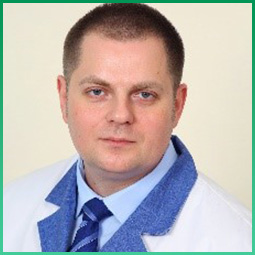 Background: Solid tumors in children are one of the most common childhood malignancy, second only to hemoblastosis. Among solid tumours, about 5% are bone sarcomas: osteosarcoma (3%) and Ewing's sarcoma (2%). Atypicality of the these diseases course makes an early diagnosis a real challenge.
Case Reports: The presentation presents six clinical observations of patients with bone sarcomas. We demonstrate the difficulties in diagnosing of this disease group which is associated with the absence of both specific symptoms and distinct clinical picture.
Conclusion: Pediatricians and pediatric surgeons should take into account the possibility of atypical course of bone sarcomas in children. Low cancer alertness is the reason for a significant delay in establishing the correct diagnosis which contributes to the tumour process generalization and reduces the chances of achieving remission while increasing the cost of treating such patients.

M.Yu. Rykov graduated from the medical faculty of the Moscow Medical Academy named after I.M. Sechenov, residency at the Department of Oncology, internship in pediatrics and pediatric surgery, postgraduate study at the Russian Cancer Research Center, completed advanced training in pediatric oncology and healthcare organization. In 2013 to 2019. held the positions of a researcher, senior researcher, deputy director of the Scientific Research Institute of Pediatric Oncology and Hematology. Also in 2015 - 2016. worked as a senior researcher in the laboratory of social pediatrics at the Scientific Center of Children's Health of the Ministry of Health of Russia, in 2016-2019. - Associate Professor of the Department of Oncology, Sechenov University. 2019 to 2021 M.Yu. Rykov served as an assistant professor at the Department of Oncology at Sechenov University, and was also the chief freelance pediatric oncologist at the Ministry of Health of the Russian Federation in the Central Federal District. In 2013 he defended his thesis for the degree of candidate of medical sciences on the topic "Implantable port system as an optimal venous access in pediatric oncology", in 2019 he defended his thesis for the degree of doctor of medical sciences on the topic "Improving the system of organizing medical care children with cancer in the Russian Federation ”. In June 2021, he was appointed Vice-Rector for Research and Innovation at Tver State Medical University.