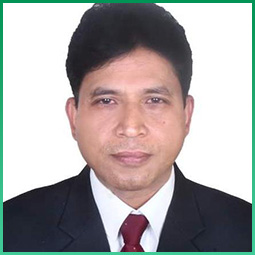 Title: Analysis of Nutritional Status of Under Five Children in a Rural Community of Bangladesh

Background: Nutritional status is a positive health indicator. In Bangladesh, malnutrition is a major health problem which is associated with morbidity and mortality in under 5 children. The aim of this study was to identify the nutritional status of under 5 children.
Materials & Methods: This cross-sectional study was conducted at Sreepur Upazila of Gazipur district in Bangladesh during the period from May 2015 to April 2016. A total of 706 under 5 children from 6 months to 5 years were selected purposively. Data were collected from the children’s mothers through face-to-face interviews using a semi-structured questionnaire.  Weight was taken by using a portable Salter scale with a 125 kg maximum capacity. A portable Salter hanging scale with a 25 kg maximum capacity was used for children less than 2 years of age who could not stand properly. Age was determined from the verification of the EPI card as well as history from the child’s mother. A height measuring stick was used for measuring the height of 2-5 years children and a length measuring board was used for measuring the length of less than 2 years children.
Results: In this study, the mean age of the under 5 children was 34.61±5.4 months, 50.7% were male, 3% were ultra-poor and 42% were poor. Among the children, 49% were underweight, 39% were stunted and 10.5% were wasted. Among the underweight, 14% were severely malnourished, 19.2% were moderately malnourished and 15.8% were mildly malnourished. The nutritional status (weight for age) was significantly associated with the mother’s education (p<.05), socio-economic status (p<.01) and presence of disease within the last 6 months (p<.01).
Conclusion: The prevalence of malnourished children in a rural community in this study was found very high. Of them, underweight children were higher than wasted and stunted children. The mother's education, family's financial status and the child's physical well-being can play a significant role in improving the nutritional status of under 5 children.